Let’s kick off our tour of Prague pictures with this snap of Bret checking out the Bourbon Bar (Est, 2014) in the hotel lobby. He was unimpressed with the options, by the way.

You may or may not remember this, but we had a very small amount of time in Prague. The train schedule meant that we arrived at 7:30 Sunday morning and had to leave by 3 pm the next day. This meant that — unlike in other cities — there were no naps.

We had to see as much as possible with the time we had.

So here’s a list of 6 things we saw in Prague on our whirlwind tour — you know, in case you only have 12 hours there next week.

If I learned one thing in Prague, it’s that they really like their clock. And it’s cool! Even cooler than crowding around the clock is paying the money to go into the clock tower. Panoramic views of the city await you!

Here I am, enjoying the clock with 387 of my closest friends. 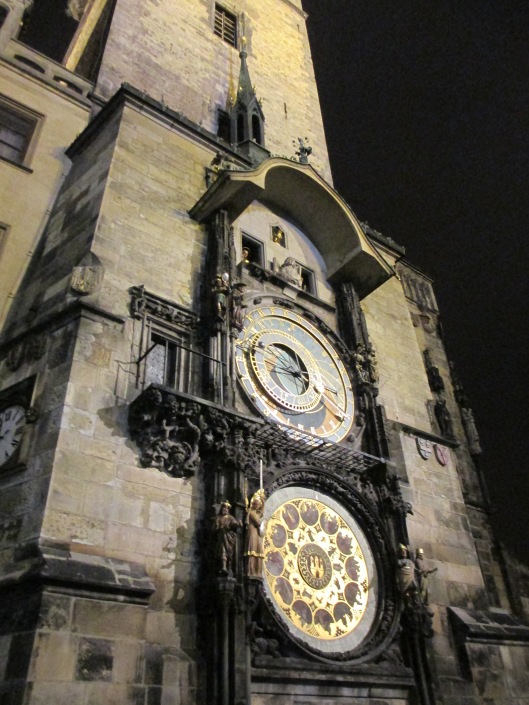 It’s so accurate! And so old! 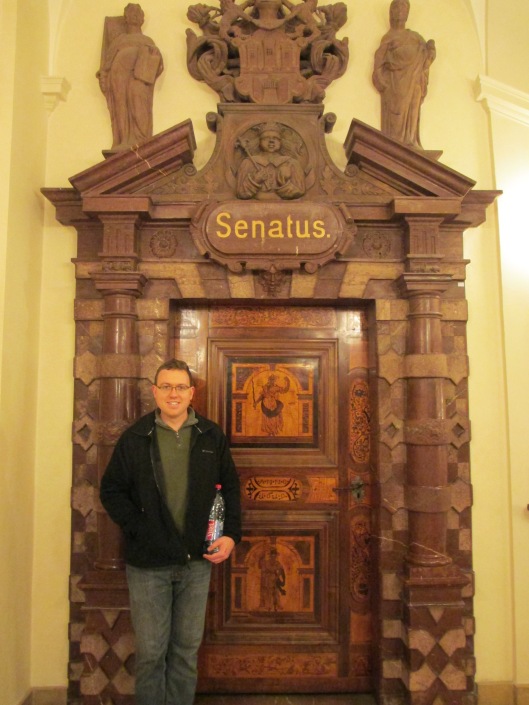 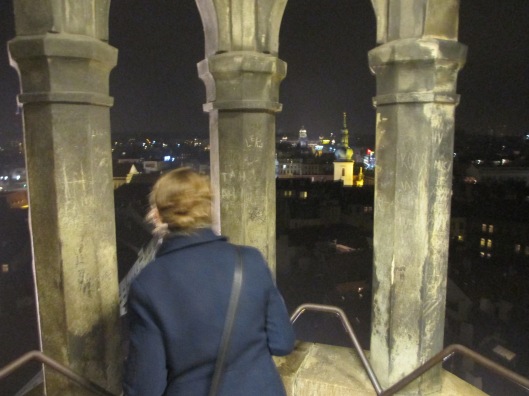 We really lucked out on our timing here because the square in Old Town was just starting up its Christmas market. We watched a performer playing “Name That Tune” with the crowd, met some new horsey friends and ate a delicious pastry. Very cool.

View of the square from the tower.

Now, try and tell me that you wouldn’t feel pretty grand if this were your parish.

You should go, obviously. Perhaps to their 9 pm Sunday Mass. Because that’s right up my alley.

St. Vitus Cathedral is located in the castle complex. Honestly, as far as I’m concerned, it was the best part of the whole castle experience. The windows are absolutely incredible and well worth the price of the ticket. 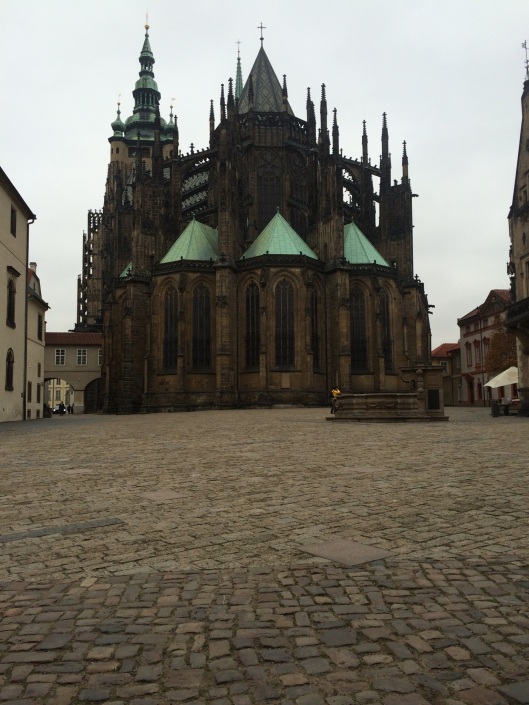 Consider the fact that this was all built by hand. 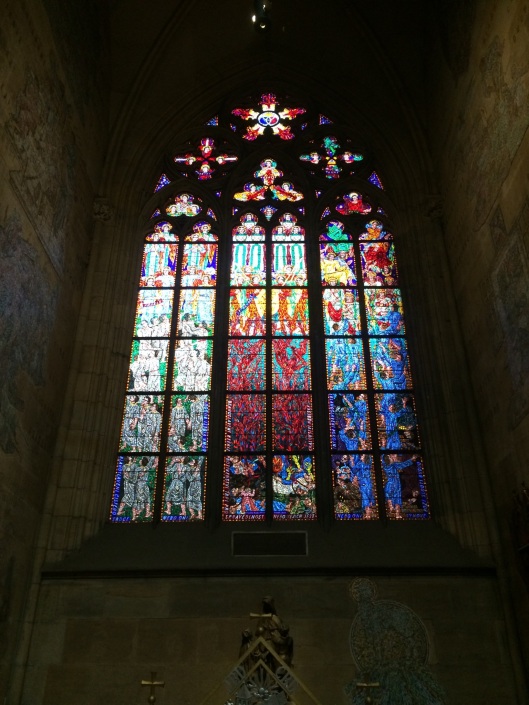 Look you gotta go because you’re in Prague and it’s part of the authentic Praha experience. However, the castle itself is kind of underwhelming.

The sidewalks were really fabulous, though. 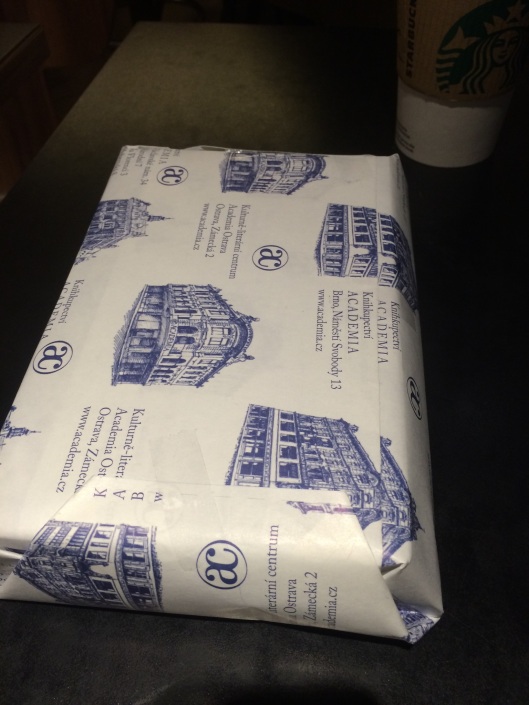 This isn’t a parcel of garnets, but can we talk for a minute about how adorably well wrapped my books are? I haven’t even wanted to open them yet.

Because what’s the point of going to a country where the garnets are cheap if no one will buy you any?

One of the perks of getting into the post-scheduling groove is that I only really need to spend a few hours on Friday getting things set for the week. (Other than weekend pictures and post-Mass fashion shoots.) One of the downsides of that set-up is that, on long holiday weekends, I very rarely feel compelled to bust out my computer to schedule things for the next.

But it’s all good, because Jenna’s here to give me a platform to give you a bullet point list. 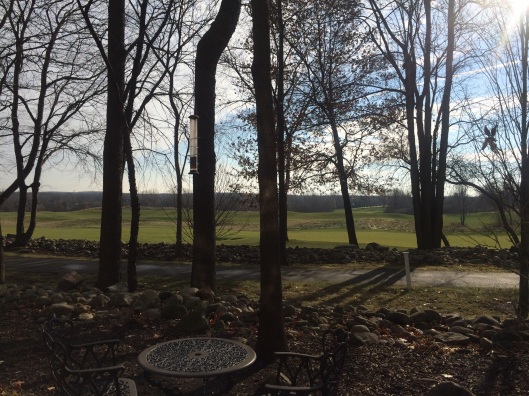 It has recently come to my attention that there are, in fact, actual people left in the world who — honest-to-goodness — hate Catholics. Is it too passive aggressive to send them the most Catholic-y Christmas cards known to man?

The decorations are almost entirely up, but The Bunny finds the tree skirt offensive.

What a grand entrance hall!

There’s no tank in the window anymore, but isn’t the New York Cafe grand? 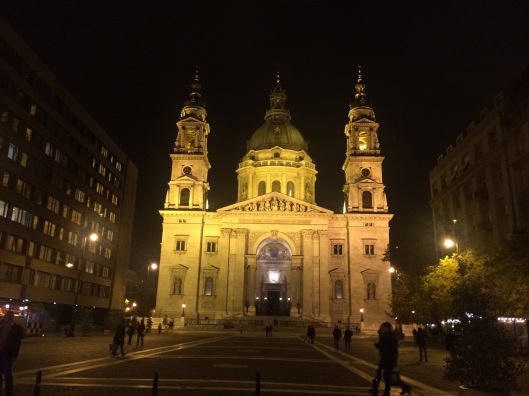 To find out what everyone else has been up to, scoot on over to Call Her Happy. 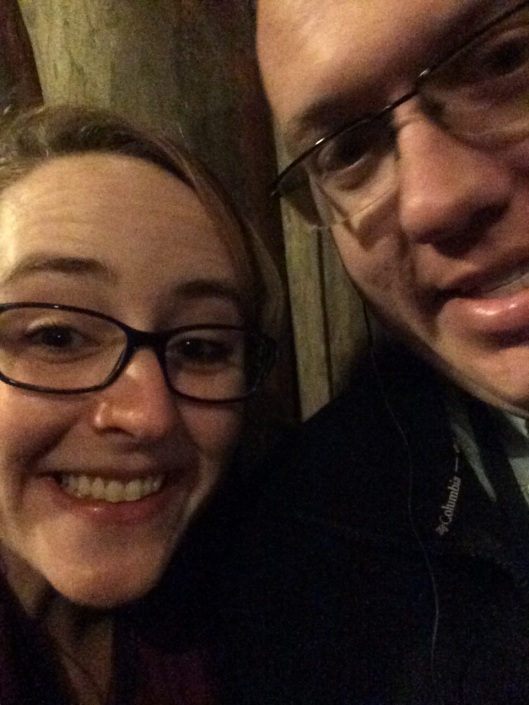 Are you ready for the first (of many — let’s be real here) posts about our trip? I sure hope you are! Today, I’m going to tell you all about our trip to the Wieliczka Salt Mine. Sure, it might not seem like a salt mine is a prime tourist attraction, but in Krakow, an 800 year old salt mine is the place to see and be seen.

The Surface of the Mine.

Honestly, when it came to cultural excursions, our choices seemed to be the Mine or Auschwitz. We chose the Mine for a number of reasons, so we booked the trip through our hotel and set off on a rainy morning. Here are five things I can tell you, right off the bat, about booking a trip to Wieliczka: 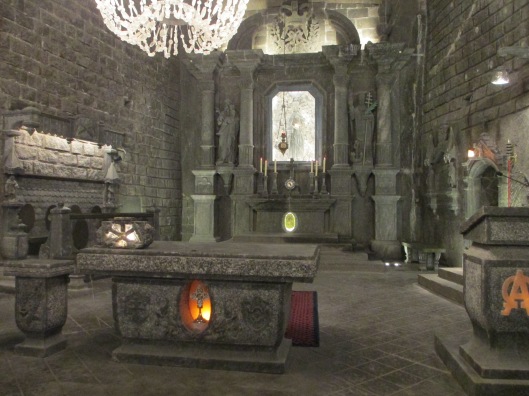 The world’s only Cathedral made entirely of salt! 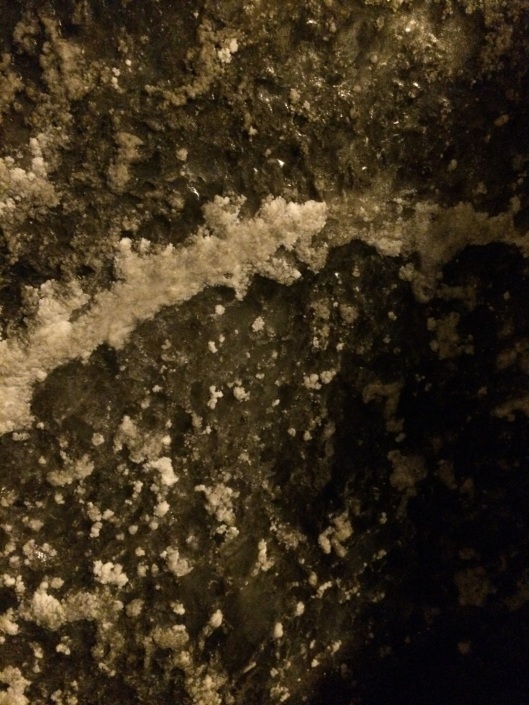 Fun fact: This is the wall I licked. Bret was so disgusted with me that he refused to take a picture proving it happened. You’ll have to enjoy this after shot of the completely unimpressed wall.

So, with that knowledge in mind, I can tell you that our trip to the Wieliczka Mine was worth every Zloty. If the underground pilgrim route isn’t cool enough for you, there are an astounding number of salt sculptures that were crafted by miners not artists. 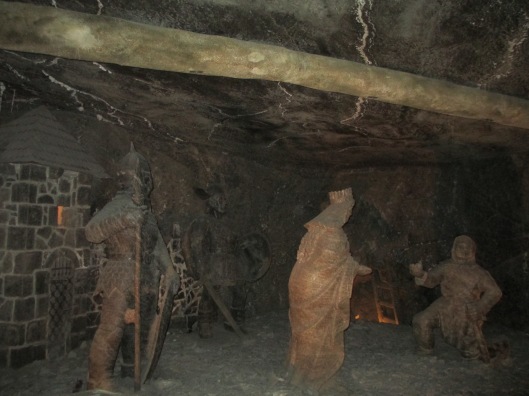 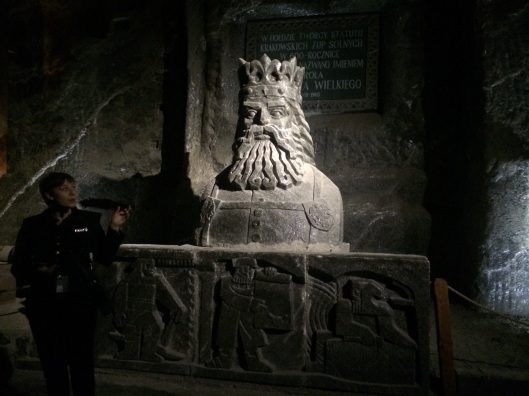 *This might only apply to me, but if I don’t get lunch, I contemplate starting international incidents.

Oh hey there hey! I’m back (and better than ever) from our epic European adventure. Obviously, I’m going to force you to read all about it in the weeks to come, but I wanted to pop in for 7 Quick Takes with a few fun facts and statistics for you.

Fun fact, you can’t go more than 50 meters in Budapest without falling all over something with my name on it. Because all of Budapest belongs to me.

According to my beloved FitBit, I walked a total of 324,916 for 155.58 miles. Of course, we can’t necessarily believe what the FitBit tells us in terms of mileage but I do think that I could stand to put in a little more effort into my daily physical activity — because health and stuff. 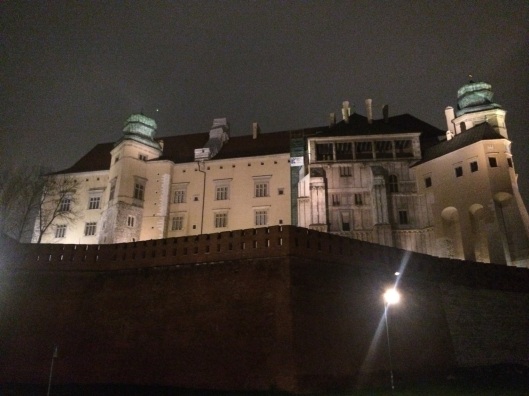 The Wawel Castle in Krakow. Former hangout of Pope Saint John Paul the Second — before he was a Pope or a Saint.

Over two weeks, we were in 5 cities that spoke 4 different languages. We took five planes and four trains to get there. I would tell you the number of churches, cathedrals, palaces and museums we visited, but we lost count at the double digits.

We visited 1 zoo, though. In Vienna. It was the best zoo I’ve ever been to. 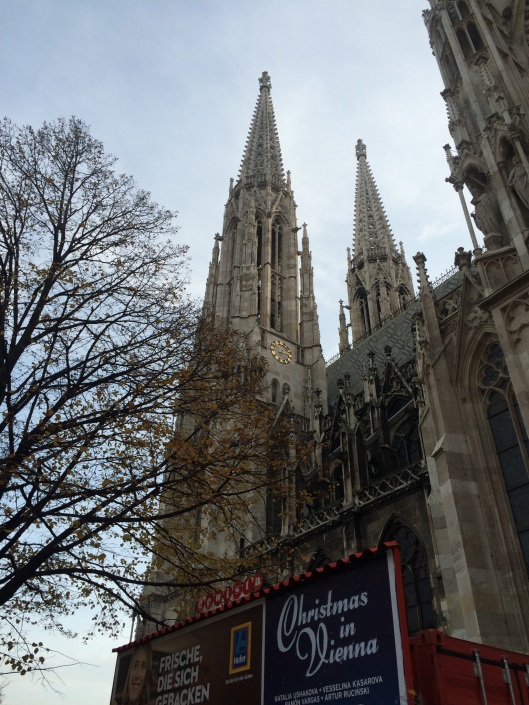 I found some horses.

Most of the cities we went to had slogans — because tourism and stuff. Some of them were pretty impactful, like “Vienna. Now or Never” and “Vienna Waits for You.” (Yes, we totally noticed that those two seem to contradict each other.) There were also such gems as “Budapest: Pearl of the Danube.” and “Krakow: JPII’s Boyhood Home.” (“Budapest: Home of the Ballpoint Pen.” didn’t make it through the run-off elections, I don’t think.)

As great as those slogans were, we decided we needed to write some of our own:

See? See? Everyone is getting on the Fishsticks and Mac’n’Cheese Friday trend!

Fun Facts from Other Travelers.

One of the best parts of traveling is that you get to meet other people who are traveling. For the most part, we did what we could to avoid making new friends out and about (sosorrysointrovert) but, despite our best efforts, we did meet some friendly people who told us all about what life is like in Britain. Here are some things that I learned:

At the center of the best zoo in the world.

Anytime you travel, you find all sorts of stuff that you never knew existed. For example, we greatly enjoyed the sesame goldfish crackers that were available for purchase in several countries. We were not quite as enthused by the ketchup-flavored Cheetos. The best weird thing we brought home by far is the Mike Tyson Energy Drink.

…honestly, it’s so good that it’s going to get its own post.

No open container laws means that you can enjoy your Otter viewing with a side of Ottakringer. Your bobcats with beer, your penguins with porter and so on and so forth — I can do this all day.

For more Quick Takes, visit This Ain’t The Lyceum! Bring sparklers because Kelly can be a touch sensitive about her pyrotechnics.

This is a quick programming note to let you know that I’m back in the US! I plan to spend the day unpacking, doing laundry and cataloging all the sweet stuff we bought. 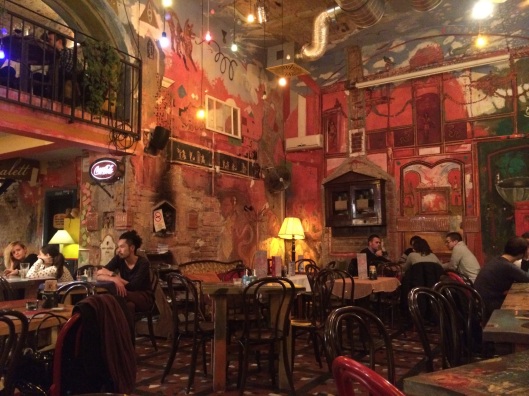 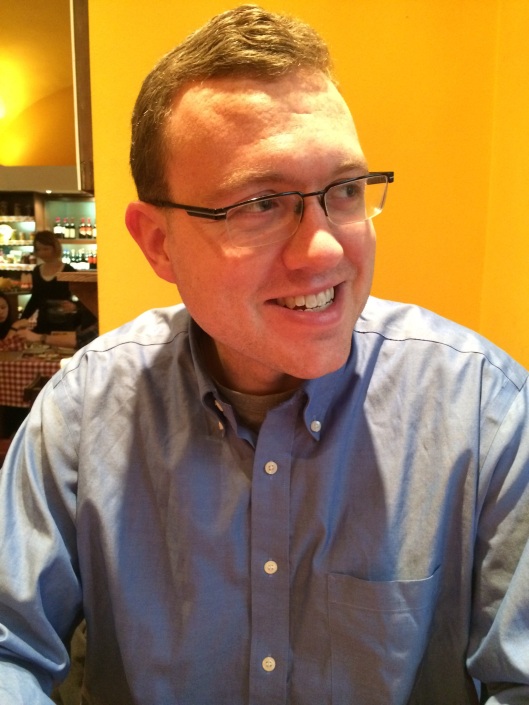 Hi there! I’m just popping in really quickly to tell you all hello from Prague and show you what I wore Sunday. The way it worked out with trains and buses, we’re getting less than 30 hours here, so it’s been vitally important that we see as much as we possibly can before we head to Vienna.

Yesterday, we spent the afternoon and evening cruising through Old Town. Today, we’re going to take ourselves on the quickest tour of the castle in the history of the universe.

I wore this white dress because it was our anniversary. Also, because it’s cute.

After Mass, I made a new horsey friend.

We went to Mass at Our Lady before the Tyn. (On the right.)

For more sweet Sunday showings, head over to Fine Linen and Purple. 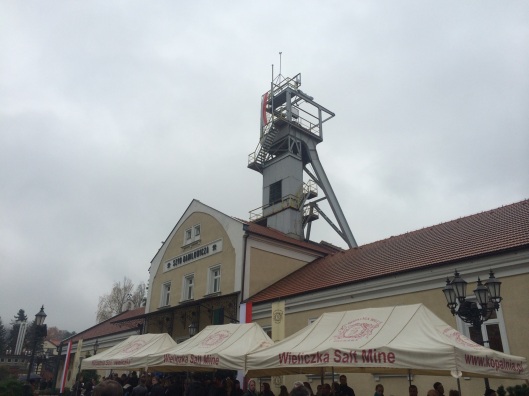 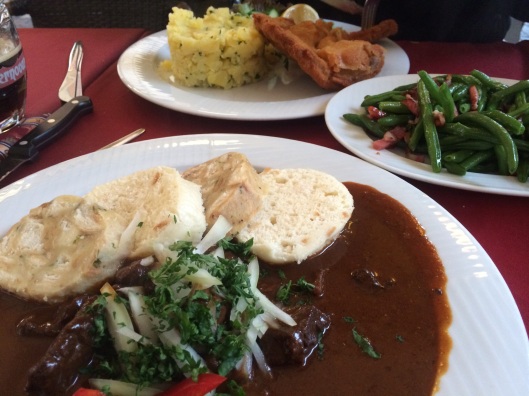 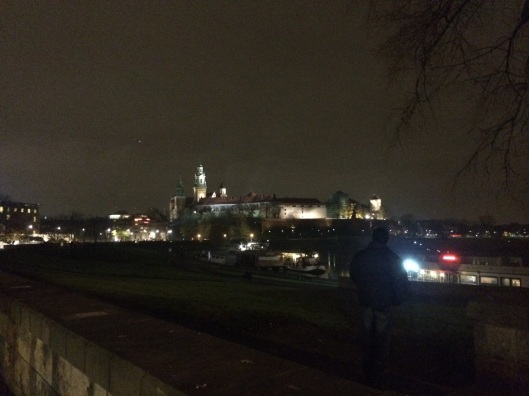 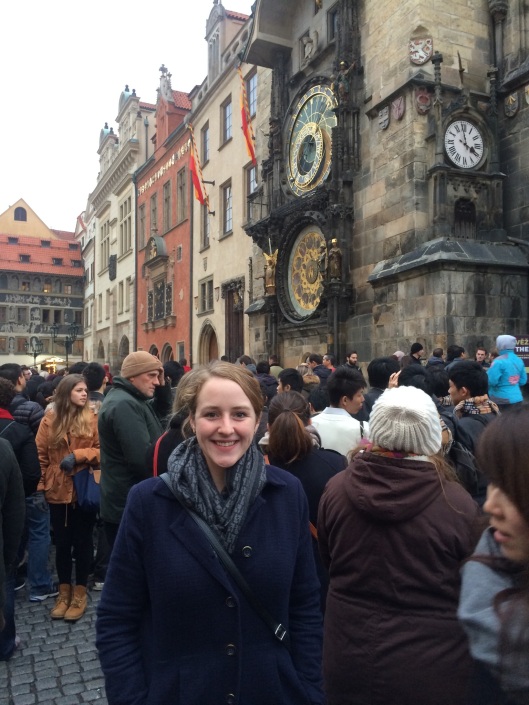 I’m just as excited as this kid.

Our departure date has finally arrived! We’re leaving on an epic honeymoon adventure to Eastern Europe. While I’m away, there’s going to be oodles and oodles of fun stuff for you to read from a bunch of super swell people (including some of my real life friends who don’t even blog).

Plus, you know, I wrote some sappy stuff about my anniversary.

See you in two weeks!

Growing up overseas, my family spent a lot of time on planes going back and forth between our home and our extended families. As a result, I’m a pro when it comes to killing time on a plane. I know that passing time in transit is a really personal thing, but here’s what I do in case you’re curious.

I’m a big reader, so my preferred method of passing time in transit is to read a book, magazine or newspaper. Actually, one of my favorite parts of any trip is the pre-boarding trip to the newsstand to pick out some new material for the ride. (Pro-tip: Don’t buy books at the airport — they’re very expensive.) Also, I make a point to only bring books that I’m comfortable leaving behind. It saves on weight and I’m sure that someone will appreciate the new (to them) book.

Some people are into music. Some people aren’t. Personally, I find the roar of the engines to be a little unsettling so music is a must.

If you’re the sort of person who cannot sleep on a plane, you have my deepest sympathies. I am not one of those people. Tray table down, head on the arms and away I go. On this trip, I plan to sleep as much as possible — you know, so I can be as hype as possible for all the adventures we’re going to have.

When my eyes get tired from reading, I’ll flip through the the in-flight movie selections. When I flew to California, I discovered that those little monitors in the seat back have gotten a lot cooler since the last time I took a plane trip. I fully intend to take advantage of it this time around.

Or you know, not.