a million ways to die in the west, Allie Brosh, Catholic, cleaning, friends, hyperbole and a half, mass, medical emergencies, productivity, Toothpaste

1. What’s something you intended to do yesterday, but didn’t?

I really, really had high hopes for my productivity yesterday. I was going to do laundry and pick up my kitchen a little bit and get caught up on some post ideas I’ve had. That didn’t happen. Instead, I golfed, went to brunch with my husband and parents, took a nap while watching the US Open and then went to mass/dinner with some of my church friends.

It was a great day, but all that nitpicky housework has to happen today. Starting with a trip to the grocery store. (Woo?)

I’ve never been the grill master — that’s been left up to my dad or Bret — but when I do fire up (my parents’) grill, I like to make vegetables. Grilled asparagus, bell peppers, onions, you name it. 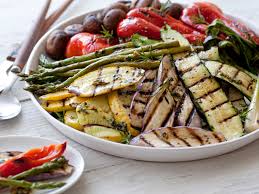 Actually, if I stop and think about it for a minute, I’m not really a big fan of meat in general. If you’re like me and prefer vegetation, check out these 20 fancy recipes for grilled vegetables.

3. What movie did you see most recently?

A Million Ways to Die in the West on Friday night. Yes, it was gratuitous. Yes, they dropped the F-bomb more than was strictly necessary. Yes, I laughed like the 12 year old boy I am on the inside.

Seriously though, I watch a lot of stuff that isn’t strictly Kosher (so to speak) but I still enjoy it because I am an imperfect person with terrible taste in media. The good news is that I’m not alone. Most of my mass friends have seen it and we talked about how hard we laughed and how much we hated ourselves for laughing so hard.

4. Would you say your tendency is to over or under react to medical situations?

Under. Way under. And it’s totally genetic because my mom is the exact same way. I’ll offer three examples to prove my point:

5. Do you squeeze the toothpaste tube or roll it?

I’m a roller who married a squeezer. It causes problems.

Well, my dad was in town for the weekend, so we did some hardcore eating/World Cup watching/US Open discussing. It was a beautiful thing. And plus also, we’ll be seeing Bret’s dad and grandfather next weekend, so we’ll be able to celebrate then.

Here’s What I Wore Sunday:

You may notice that this outfit looks almost exactly the same as last week’s outfit. That’s because I’ve given up.

Answer Me This is a linkup hosted by Kendra at Catholic All Year. Go learn more about some awesome people here.

What I Wore Sunday is a linkup hosted by Fine Linen and Purple. See what all the other pretty people wore here.